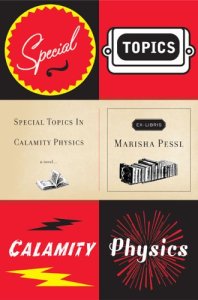 The call-to-action started with a simple tweet yesterday from author Maureen Johnson: “I do wish I had a dime for every email I get that says: ‘Please put a non-girly cover on your book so I can read it – signed, A Guy.'”

The Huffington Post continued the discussion with a slideshow of re-imagined covers of famous books written by men but designed as if they were written by women. It was brilliant.

I’ll admit that I had never noticed this, um, I’m going to call it a “point” instead of a “problem,” as I’m still not sure it’s something to complain over—anyway, I’d never really noticed this point until it was brought up. But even in discussion, I’m just not convinced this is an actual thing. It seems like it would be more common and concerning in the Young Adult book market, where growing teens are extremely concerned with gender stereotypes and may actually judge a book by its cover.

But in a market for grown-ups? Eh. As an example, I’d like to present one of my all-time favorite book. Not by a woman, but just ever, and it happens to be written by a women: Special Topics in Calamity Physics by Marisha Pessl. Definitely not a girly cover.

However, this small discussion seemed to open up to a much wider issue detailed in an article from The Guardian, “Coverflip: Author Maureen Johnson Turns Tables on Gendered Book Covers,” written by Allison Flood:

Bestselling novelist Jodi Picoult agreed. It’s “totally true”, she told Johnson. “I was critiqued for having ‘obligatory romance’ in all my books. When in fact, just last year, my book had none,” she tweeted. “Why is it ‘domestic fiction’ if a woman writes about family/relationships, but if a man does that, it’s Pulitzer-worthy? … The follow-up: what would happen if a woman submitted a book under male pseudonym to a publisher? Would it be treated differently?”

Amanda Hocking, the million-selling self-published novelist who landed a mega-bucks book deal for her paranormal romances, said the “gender cover-up” exposed by Johnson had made her “angry”. “I’m sick to death of this. I am so sick of the constant, blatant sexism. And any time anyone points anything out as being sexist, they’re accused of ‘whining’ or ‘nagging’ or ‘not taking a joke’,” wrote Hocking on her blog. “From the Steubenville rape trial to the obituary of Yvonne Brill, to the fact that more women read books than men, more women write books then men, but only a small fraction of books that win literary awards are written by women. Women are the publishing industry’s bread and butter, we are the backbone of the damn entertainment industry, but we are constantly demoted to ‘fluffy’ to ‘light’ to ‘meaningless.'”

Comments are there below for your views. Discuss!

Side note: I am, like many other readers, anxiously waiting for Marisha’s sophomore effort, Night Film, due out August 20 (two days after my birthday—it’s like she knows!)